This means, in my estimation, that 83% of the audience are wrong.

Every reaction to the film I see is a variation of this: 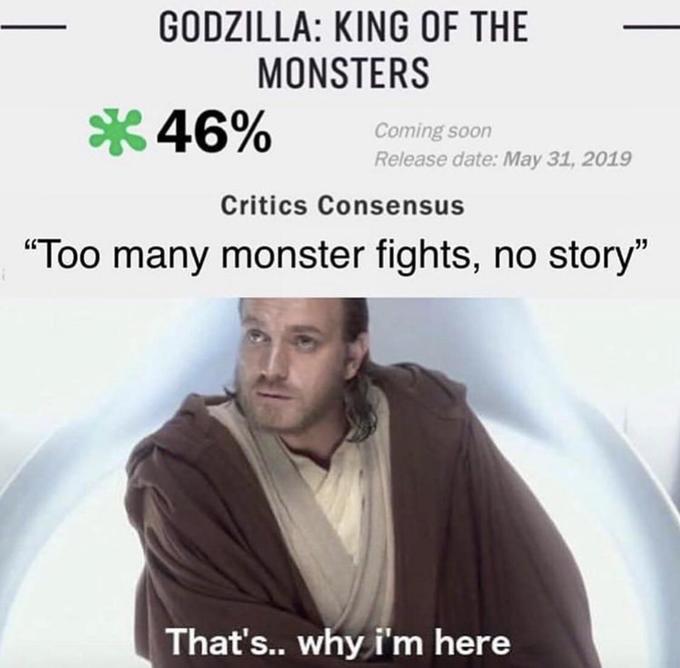 excised from here. might, uh, want adblock turned on for that one

Reading reactions like this in the days before I watched the movie bolstered a particular feeling in my heart: compassion! Sympathy for an underdog! Critics, enemy of the casual viewer, are too preoccupied with theory and technicalities to enjoy the simple pleasures we lowly viewers alone can experience. Surely the critics were out of touch, and the movie was fine.

After all, Godzilla 2014 was an excellent movie, and a bunch of people had disliked it as well! Admittedly, the human sections were aggressively uninteresting. Sure, it was a general waste of Ken Watanabe-who spent the movie dramatically removing his glasses and murmuring "let them fight"-and Bryan Cranston-who spent the movie yelling about the government turning frogs gay and then being dead. When the monsters did show up, the film used suspense, scale, and sound to elevate an otherwise boring film. All 15 minutes of monster action built to an epic climax, with the music cutting out for Godzilla's fire breath decapitation attack, and then flaring back up to accompany Godzilla's triumphant roar.

Those fifteen minutes were worth 2ish hours of tedium.

Obviously, critics didn't understand. We fans could wade through a boring story for a few good monster fight scenes. I fully expected to enjoy the King of the Monsters, and I have no doubt now that many people like me defend the movie more vigorously to counteract those malicious critics.

Godzilla: King of the Monsters parallels the Godzilla 2014 in several ways. Both films focus on a human story for the majority of the films runtime, and cut back and forth during the climax between the intertwined monster and human storylines. Both films have excellent visuals and monster action.

But in terms of visuals and action, King of the Monsters effortlessly surpasses Godzila 2014.

I was floored by some of the scenes. Rodan bursting from the volcano. Mothra descending from the sky and dispersing clouds and rain. Ghidorah floating in the middle of the hurricane.

The music in King of the Monsters humbles the soundtrack of Godzilla 2014. Mothra's theme, especially, needs to be 2-3 minutes longer, so I don't have to keep mashing the repeat button. The theme from the original 1957 Godzilla movie is incorporated into the score as well, hitting a cord of nostalgia in my heart.

There was also some cool themes played with, like Godzilla and Mothra's relationship as natural destructive and regenerative guardians of the Earth, which fuels their clash against the extra-terrestrial false god Ghidorah.

One's enjoyment of Godzilla 2014 depended on one's personal tolerance for the boring human plot lines and one's appreciation of monster action. For me, the brief monster scenes outweighed the surrounding tedium.

Godzilla: King of the Monsters contained far more monster action, so theres no way my net enjoyment could resolve to negative, right?

There was a scene early on in the film that marked the inflection point in the graph of my enjoyment of the film.

Main character dude-I've forgotten his name-directs the military and research staff to lower their weapons and open the observation window, to show a circling, aggressive Godzilla that they mean him no harm. The soldiers do this, and Godzilla is placated.

There were several things that irked me in that scene:

At this point, my heart began to sink, and I tried to convince myself that there was plenty of runtime left and this movie could easily redeem one stupid moment like this. I was wrong. I would instead wish to claw my eyes before the end.

Main Character Dude was introduced as having studied the monsters and worked together with his wife on a device to generate a signal that the monsters would understand. Both the project and his wife were then abandoned for a career of wildlife photography. Despite being surrounded by military and scientific personnel dedicated to dealing with these monsters, he alone solves every problem in the movie. Not just monster biology problems, as his scant backstory would justify. At one point, he un-jams a damaged hanger door by dropping a helicopter on it, after pushing past a throng of engineers and crew members.

Every other character is useless. One particularly grating character seemed only to exist to repeatedly remind everyone else that monsters reproduce sexually, a fact too naughty for all the military and scientific personnel, who blush and sputter when it is mentioned.

The Oxygen Destroyer, a weapon pivotal in the original Godzilla, is both introduced and proven useless in a 30 second sequence to show that the military has no idea what it is doing, kicking off an unnecessary 30 minute arc involving, of all places, the lost city of atlantis (no Megalon to be seen, unfortunately).

A Crime Most Heinous

I'm not sure if I enjoyed the climax of the film. Sure, there was cool monster fighting and general destruction, but I was preoccupied by a constant dread. A dread that, suddenly, a scene would be cut short to focus on a human subplot. A dread that was realized again and again. After all, Main Character Dude's Daughter was in the middle of the final battle, and it was of utmost priority that all the humans drop whatever they were doing and find her.

aaaaargh I just remembered that there is a scene where the kid outruns Ghidorah's lightning blasts.

By the time Godzilla pulls off his Majin Vegeta Final Explosion attack and saves the day, I just wanted it all to be over.

I'm not sure how they pulled it off, but I wanted to walk out of a monster movie during the climax.

I'm sure the shock of what I witnessed has left my opinion skewed, so I'll eventually re-watch Godzilla: King of the Monsters at home. It might be interesting to see how much my opinion changes, and to examine whether a movie deserves to be judged based only on the initial viewing.

Until then, I guess I'll be a bit more careful when jumping on a bandwagon, because sometimes, the critics are right.

P.S. and sometimes they aren't, The Last Jedi does not deserve a 91%